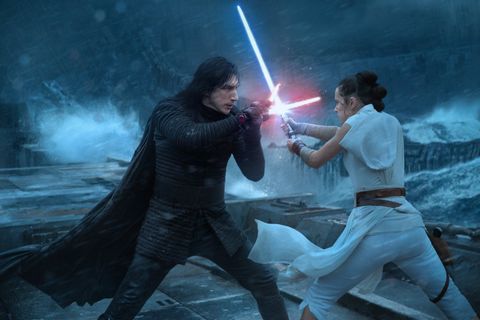 It’s almost impressive how aggressively uninteresting Star Wars: The Rise of Skywalker is. The storytelling is muddled to the point of incomprehension, and the characters make decisions motivated by nothing more than attempting to move the plot along or set up/open another mystery box tied to mythology that ultimately doesn’t really matter. What should have been an emotionally charged battle for Kylo Ren’s soul becomes a treasure hunt that gets bogged down in answers to lore-driven questions that didn’t need answering, and the “truth” of Rey’s parents sidetracks this trilogy’s hero for almost the entirety of the film as she continuously says “peace out” to her loyal companions in favor of risking her life (and theirs) to chase… something?

Does it even matter what? And alongside her, Kylo Ren’s redemption arc gets shortchanged in the most frustrating of fashions as he keeps chasing Rey for… other reasons?

The root of the movie’s problems as it relates to Rey and Kylo Ren is Palpatine. By bringing the Big Bad from the original trilogy back to life, he sucks so much exposition and story out of what, again, should have been a finale focused on a mission to save Kylo Ren from himself. Even beyond that, Finn doesn’t get a story arc beyond saying “Where’s Rey?’ over and over again, and Poe’s character development from The Last Jedi vanishes in favor of — you guessed it — more fly-by-the-seat-of-your-pants rogue nonsense.

The piss-poor story and pacing removes all emotional attachment to these characters, and the film’s loose definition of the word “death” renders all stakes meaningless. If Palpatine was brought back from the dead once, who’s to say he won’t be again? Why even try killing him again? And if we know Kylo’s not going to kill Rey, what reason is there to be excited when they’re bashing their lightsabers against one another?

But beyond a bad story and non-existent character arcs, Rise of Skywalker is also a drag from a cinematic standpoint. The visual language of the movie is perplexing and small-minded (the first half-hour or so is confusing as hell), and the starship battles lack clear geography and propulsion. By the final act of the entire Skywalker Saga — a moment that should be fraught with tension — you’re just kind of sitting there mindlessly following along, with any care or passion or interest drowned out by the baffling decisions made during the previous two hours.

In attempting to make a film that caters to all Star Wars fans and ties up the lose ends in all of the Skywalker Saga movies, J.J. Abrams shortchanges the very characters he so successfully crafted and introduced in The Force Awakens. That’s its biggest sin. Rey, Kylo, Poe, Finn, and yes Rose Tico deserved better than this half-baked, fan service overload. What a colossal disappointment.